We tend to be attracted to fruit grown in cool, coastal areas, with a focus on the Corralitos area of the Santa Cruz Mountains. 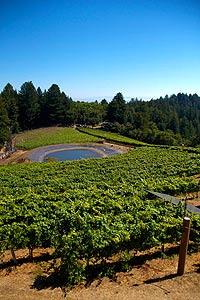 Split Rail is our signature vineyard.

Planted on an old lake bottom that got pushed up to 1700′ in Corralitos (Southern Santa Cruz Mountains AVA, home of Windy Oaks & Alfaro), with dramatic views of the Monterey Bay, the former Split Rail Vineyard was a longtime standby for David Bruce and Clos La Chance. The soils are gray sandstone and clay, with a limestone vein down deep.  This spectacular mountain-top is where the warm east wind from the valley meets the cool ocean breeze in summer, evident by the combination of giant Madrones (hot, dry climate) growing alongside mammoth redwoods (cool coastal climate).  Approximately two acres of this mountaintop vineyard is planted to Pinot Noir, with “David Bruce Selections”, Champagne clone 32 (aka UC Davis Clone 32) and Pommard making up the bulk of the planting. The rest of the vineyard is planted to Chardonnay clone 4, with a light mix of French clones 95/110R, 76/110R and 809/110R; all of which benefit from the long Corralitos growing season, which is cooled down by the ocean breeze blowing off the summer Aptos fog 5 miles and 1700′ down below.

David Bruce Selection is an old field selection consisting of Mt Eden Clone, Martini Clone, Wädenswil and Pommard (see below), and is one of the original Pinot Noir selections grown in the Santa Cruz Mountains AVA. Some of the original cuttings of Mt Eden Clone are reported to have been brought over from Chambolle-Musigny, on the prized Côte de Nuits, France, in the 1890s by Paul Masson, and were then planted by Martin Ray in the 1950s at his estate vineyard in the Santa Cruz Mountains (now known as Mt Eden). Many wineries, including Chalone, David Bruce & Williams-Selyem have made great use of this unique field selection of clones, which, as a group, are known for their delicacy and floral aromas, and which Robert Parker has described as “silk & lace”.

Champagne clone 32(DNI), which was grafted to Freedom rootstock, brings a rich earthiness to the mix, with hints of plum jam, black cherry, clove and redwood humus. The lower half of the vineyard was recently grafted over to Pommard clone 4. These clones make up the perfect clonal blend for the old world, delicate Pinot Noir we strive to make here at Sante.

Chardonnay from Split Rail vineyard expresses crisp minerality and a Burgundian nature that balances fragrant hibiscus, pineapple and pear aromatics with hints of granite to form the backbone of clean, austere Chardonnays.

About Clone 32 (quoted from Capazzo Winery)
UCD 32 was sourced originally from a vineyard in Ay, across the Marne River from Epernay…It is sometimes said that the original vineyard sources of these clones were Roederer’s own Champagne vineyards, but viticulturalists at Champagne Louis Roederer cannot confirm this claim. Allowed to ripen fully, it gives complex wine, saturated with dark fruit nuanced with jam, tar, and leather.”

David Bruce was determined to produce Pinot Noir when he acquired 40 acres of vineyard land in the Santa Cruz Mountains in 1961. Only Martin Ray was making Pinot Noir in that region. Bruce obtained the cuttings used to plant his vineyard on Bear Creek Road in the Santa Cruz Mountains in 1962 from two sources: (1) The increase block at Wente’s Arroyo Seco vineyard which only contained certified clonal stock including Pommard, Martini and Wädenswil, and (2) Martin Ray’s vineyard at what is now known as Mount Eden (the exact origin of these vines is unclear except that apparently they were a field selection from Burgundy brought into the United States in the 1890s by Paul Masson). At the time, winegrowers were not clone conscious, so Bruce would not have chosen a particular clonal type, but rather some “Pinot Noir vines.”

The vines Bruce obtained from Martin Ray are probably different from the vines selected in the early 1970s by Merry Edwards, sent to Davis for clean up and FPMS certification, and eventually became the Mount Eden clone. At least one of the so-called Swan clones also came from Mount Eden.

Pierce’s Disease destroyed Bruce’s vineyard in the early 1990s, and the last Estate Pinot Noir produced from the original vines was 1992. The Estate Pinot Noir program was resumed in 1996 after the new plantings matured. The newer plantings cam from Noble Hill Vineyard in the Santa Cruz Mountains, which had originally been planted with cuttings from Bruce’s original vines. So, in essence, Bruce got his own vine selection back (albeit some of it could have mutated) when he replanted. (Editor’s Note: Split Rail Vineyard, planted by Bruce’s vineyard manager Greg Stokes in 1986-1991 with the same selection as the Bear Creek estate vineyard, was not affected by Pierce’s disease and those original estate clones exist to this day at the Corralitos site. Split Rail was considered part of David Bruce’s “estate” during estate bottlings in the 90s due to his partnership with the land owner and the clonal selections that he planted there).

Vines in California planted with cuttings taken from Bruce’s estate vineyard therefore represent a field selection and the vines should properly be referred to as David Bruce selections.” 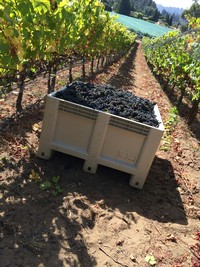 We are extremely fortunate to be able to produce pinot noir from Lester Family Vineyard, located between 400 and 500′ elevation on Pleasant Valley Road in Corralitos, Santa Cruz Mountains.  Pleasant Valley is the bucolic jewel of the Corralitos region, and is perfect for pinot noir.  There’s a strong maritime influence here, 5 miles inland from the Monterey Bay.  Morning fog gives way to moderate temperatures during the day, allowing the fruit to stay relatively cool during the prime growing season, which allows for long hangtime and optimal flavor development.

The vineyard is the showcase vineyard for noted viticulturist Prudy Foxx, and it shows.  Meticulously managed, sustainably farmed, with minimal input given.  No herbicides, deficit watering and careful canopy management yield fruit that is consistently some of the best available in the Santa Cruz Mountains.

We also make the “Mercurio” Pinot Noir, "Francisco" Pinot Noir, plus Chardonnay, Syrah and Rosé of Syrah for the Lester Estate Wines project. 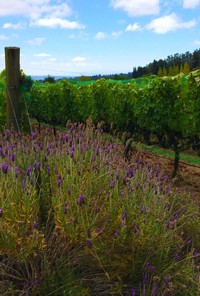 Planted to clones 667 and 115, wines from Saveria have a vivid backbone of baking spice, with bright high notes over a luxuriously structured body.

In early 2014 we took over a 15 year-old Chardonnay vineyard at the upper end of Corralitos’ Pleasant Valley that had gone a bit feral.  We grafted it over to heritage clones Martini, Calera and 2A, and then planted new rows in-between all the vinerows, bringing the spacing to 6X6 spacing.  At 700′ elevation in Corralitos’ extremely cool-climate Pleasant Valley, the vines are thriving in the loamy, mineral-rich soils. Low-yielding and intense, we have been seeing beautiful, elegant low-alcohol wines from this site.

At 1800′ elevation high above the Soquel/Aptos hills, Dalardi vineyard sits on a gray sandstone and clay bench similar to Split Rail.  Ringed by redwood trees and oaks, the vineyard literally pops out of the forest into the wide open expanse just above the fog line of the Monterey Bay, with unbelievably stunning views all the way down to the ocean, just 6 miles below.

Dalardi is a newer vineyard planted to 667 and Swan clones, and is meticulously farmed by Coastal Range Vineyard Management.  The vineyard has made up the core of our 2016, 2017 and 2018 Integrato Pinot Noirs.

After a 6 year hiatus, we are reintroducing Toulouse Vineyard to our lineup in 2021.  Toulouse was long a flagship vineyard for our good friend James MacPhail, whose take on Toulouse was one of the inspirational wines that lit our Pinot fire.  The vineyard is planted to a mix of Dijon clones 115, 667 & 777 with a bit of Pommard as well.  Wines from Toulouse lean toward the intense side of the spectrum, with darker fruit that expresses a fantastic balance of earth and dried fruit, with hints of Pennyroyal and crushed herbs. 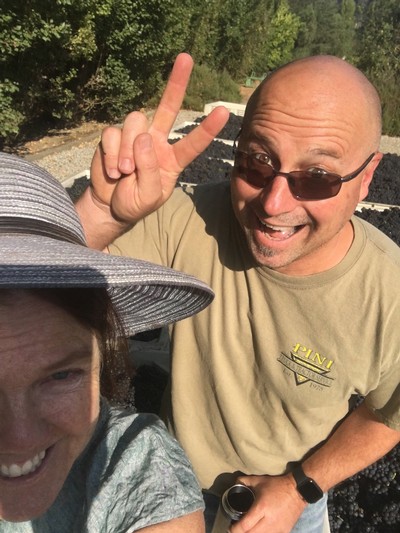 The Santa Cruz Mountains appellation is defined by elevation and stretches from the Skyline area jusst south of San Francisco to the temperate, coastal Corralitos region in the south.  Vineyards on the west side of the range must be above 500' elevation to be included in the appellation.  At 500' and above we have access to the cooling influence of the coastal fog from the ocean, which can be as close as 4 miles away... but we're not socked in by fog at that elevation.  The vineyards are little islands just above the fog.  Our appellation is known for age-worthy, acid-driven cool-climate Pinot Noir and Chardonnay.