We all know that Santé (with an accent on the E) means “health” and is used to say “cheers” in French. But there’s a lot more to it here…

Sante Arcangeli is a person.

(Say it out loud:  SAHNtay Are CAN Juh Lee).

Or, I should say, was a person. He was my Great Grandfather.  He died in 1934 at the very young age of 47, but not before fathering 3 remarkable children and building an historic business on the north coast of California, in the small farming town of Pescadero.

The children were Louise, Livia and Alfredo, and the business later became known as Arcangeli Grocery Company (aka Norm’s Market), a world-famous bakery and gourmet market, at the hands of Sante’s grandson, Norm Benedetti (my dad) and my mom Shirley. It’s now owned by Sante’s great grandson, my brother Mike.

I decided to name the winery after my Great Grandfather as a means of honoring all those in my family who came before me and provided me with the tools to do what I love to do.

Well, a byproduct of all of this was a wine cellar under “the store”. My dad began laying up some pretty sought-after French and California wines in the 70s, and turned me on to wine somewhat early in life. When most people my age were content with Natty Lite or Pabst, I was acquiring a taste for 20 year-old Chateauneuf du Pape. Problematic for a college kid on a college kid’s budget. The solution: start making my own. Why not, right? I mean, I lived smack in the middle of one of the best Pinot Noir growing regions on the planet. And, thanks to constant exposure to fine food and wine, I acquired a knack for making things taste good at a very early age.

Let me just say, so you don't think I'm totally nuts:  the notion that starting a winery would save me money and make wine less expensive for me to drink was a completely idiotic notion.  Kids:  don't try this at home.

I still believe that knowing your target is the single most important step toward making anything taste good.  That means, in this case, enjoying great wine made by others almost constantly.  Rough gig. 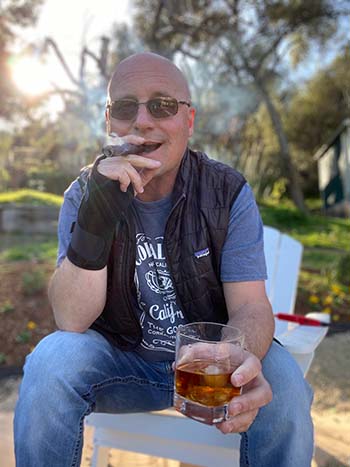 Having taught myself to brew beer in my late teens/early 20s, I segued to wine in my mid-30s after many years of successful and creative brewing. I took a detour along the way and started Sante Adairius Rustic Ales, which I sold. It started as a hobby. Now it’s a hobby gone haywire. My first barrel of wine was pinot noir, fermented with native yeast, from a very rare Santa Cruz Mountains vineyard. Jumped right into the deep end of the pool, with a goal to make delicate, layered, nuanced pinot noir and chardonnay in Santa Cruz.

We're small, but not unknown.  As we've said before, individual accolades should be taken with a grain of salt.  All they mean is this: acclaim over many years is evidence of consistent quality.  You can count on the fact that our wines will not disappoint:

Listed by Food & Wine Magazine as one of California's best-kept secrets;

Every Pinot Noir we've made has scored 91-96 with at least one major international critic;